Those were the first words I heard this morning. I swear that boy is so addicted to the internet and he’s only 8 years old. He cried. He carried on. He was sure the world was coming to an end. His computer was not working. I was in the middle of something that I could not stop right at that moment. So he had to find another way to entertain himself for a while. When I finished what I was doing I told him to was time for school. Again I heard, “Nooooooooooooooooooooooooo”. You would have thought he was dying. “I can’t do school until my brain wakes up.” “I need my computer to make my brain wake up.” “Well, we are doing school on my computer, won’t that help your brain wake up.”

Finally he decided I wasn’t going to look at his computer until he did his school work. We did Social Studies first. He is learning about the Inuits right now. He really loves learning about them. I don’t have the heart to tell him we are almost finished with that unit. Then we did language Arts. He was learning about Cause and Effect in Language Arts. When we finished school for the day I went in to his bedroom to look at his computer. Now I had already asked him if it was unplugged. He insisted that everything was plugged in. When I walked in his room, the first thing I saw is that the light is not turned on on the power strip. I flipped the switch but it still did not come on. So I looked behind the computer and there was the cord laying on the floor.

Cause and Effect. If you put too much stuff on top your computer, it will fall off and knock the plug to your computer out of the wall. Okay Boy, the computer works now. So go clean your room so it won’t happen again.
Posted by FairyLover at 11:48 AM No comments: 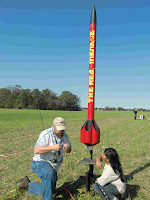 My son loves rockets. When he was about two years old, he woke up in the middle of the night. My husband was watching the movie, Apollo 13. He thought that our son would watch a few minutes of it and then fall back to sleep. Instead, he watched the entire 3.5 hour movie. Ever since then he has said he wanted to be an astronaut. About a year and a half later my husband bought our son his first rocket kit. They sat down together to build the first rocket. At that time the building process consisted mostly of Daddy telling him to “Put this piece right here. No right here. Here let me do it and you can do the next part.” Then the next part would end up the same way. Basically Daddy was building the rocket and our son was watching him. Well, fast forward about 5 years. Now my son doesn’t use a rocket kit most of the time. He can design and build his own rockets. He knows about things like how important it is to find the center of gravity and why you have to put fins on the rocket. He knows what will happen if the rocket is too big for the size motor you are using. Occasionally my husband will send me out to buy motors or parts for rockets for him. I always have to take my son along because I have no idea what it is that he really needs. So I just let the boy pick out what they need and I pay for it.

I actually did build one rocket. I spent a great deal of time carefully cutting out tiny little flowers and hand gluing them in place on my frilly little rocket. We went to rocket club. It came my turn to launch my rocket. At that moment I learned why they say to beware of the rocket eating tree. My beautiful rocket that I worked so hard on, lives forever now in the top of one of the tallest trees on the edge of the rocket field. I never built another rocket again.

Now when Daddy teaches a rocket building class to our homeschool group, my son can assist the kids who are building their first rocket. Last year when he had just turned seven, he became one of the youngest kids to achieve a level one certificate for children through the National Association of Rocketry. I think I really may have a budding astronaut on my hands. One of the biggest thrills of my son’s young life was when we were at NASA in Florida and he had to go to the bathroom. He came running out of the bathroom screaming, “Mama, Mama, do you know who is in there. Mama, I got to pee with John Blaha.” He was thrilled to be that close to an astronaut.
Posted by FairyLover at 11:43 AM 1 comment: