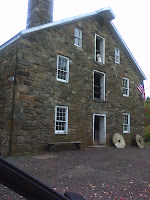 We haven’t started a study of history as history yet. We have been attending a lot of historical sites. Mostly we have gone to places that depict life in the early 1800’s. I am very interested in this time period. So I try to get my son interested in it as well. I really can’t tell you if it is working or not. He seems interested for a while. But then he wants to go outside and play with his friends instead of listening to the speaker.

Some of the places we have visited include Historic Speedwell. We have attended their homeschool classes all summer. They started in the spring by digging in the garden of the Vail homes in Morristown, New Jersey. The next month they planted seeds in little paper cups. The following month the planted their tiny fledgling plants in the garden. Later in the year they harvested the plants. Another month they learned about making crafts. Everything was done as it would have been done in the 1800’s.

Another place we visited was Cooper’s Grist Mill. During one class the kids got to practice sewing on an old treadle sewing machine. Then they learned how to card wool and they got to see an old spinning wheel. They washed clothes in an old wringer washing machine and hung them on a clothes line. Many of the kids were amazed when I said that was the way I washed clothes when I was a child. A few months later we went to a demonstration of how they made candles over an open fire. The next month the kids got to help press apples and turn it into apple cider. Each month the class also included a tour of the mill and a demonstration of how to grind the wheat into flour.

We also visited Fosterfield’s Farm. There the kids each made a small bag on the treadle sewing machine. They saw how food was canned and preserved for winter. Another month they had a display of antique automobiles.

We went to Thomas Edison’s House and saw all the old cars there. One thing that really fascinated my son was the turn around. Cars did not have reverse. They only went forward. So they drove the car into the shed and parked it on a turnstile. When they wanted to take the car out of the shed, they had to turn the crank to turn the turnstile by hand. This would spin the car around so it was facing the door. Then they could drive it out. They also had a very old record player that used cylinder shaped records.

I don’t know what era we study next year. But it certainly was fun visiting all these sites this year.
Posted by FairyLover at 1:54 PM