Little House On THe Prairie 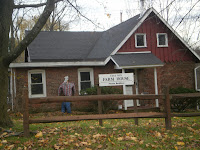 We have spent a lot of time over the last few months learning about life in the late 1700’s and early 1800’s. We love going to Historic Speedwell. Every month they have a homeschool class to learn about life in the Vail Family.

One month the class was about where they got their food. As part of that class that kids planted seeds for the garden. The following month they took the tiny seedlings and planted them directly in to the garden while they learned about tending the gardens and the tools of the time period. Throughout the summer they learned more about gardening.

After the harvest, they learned about what school was like in that time period. They learned that girls probably did not go to school. Instead they learned from their mothers at home. Boys went to school until they were needed to work the farms or help support the family. Only the wealthy boys went to school beyond elementary school. Most recently, the kids learned about crafts such as tin punching and quilt making. They learned how every scrap of leftover fabric was used. They could not afford to be wasteful. The kids all agreed that it is a whole lot easier to go to the store and buy a blanket than to hand sew a quilt.

We also visited a Grist Mill where we learned about how wheat is ground into flour. We also learned about tools that were used in the 1800’s such as wool cards, a spinning wheel, and a hand turned ringer washing machine. The kids also each made a bag on an old treadle sewing machine.

We learned about hand dipping candles at another farm. The kids also made a small oil lamp. They watched as applesauce was made and then canned to preserve it for use during the winter.

It’s been an interesting summer and fall as we have stepped back into the past. I hope you have the opportunity to see some of these wonderful skills brought to life again.
Posted by FairyLover at 1:40 PM